Posted at 16:03h in BLOG by christelle 0 Comments
0 Likes
Share 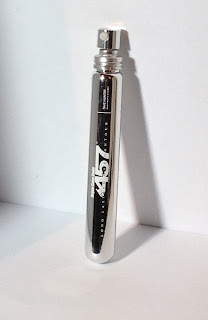 I’ve been meaning to review this for quite a while, but due to the fact that it isn’t too cheap and that I was unwilling to waste a single drop, I needed to remember to take picture of the serum itself just before I use it at night.

I’ve tried lots of different eye treatments in wildly different price ranges, and had come to the conclusion that the only thing they really achieved was to either moisturise the eye area or, if they were more gel like, sooth puffiness.  I’ve got a few eye creams I turn to when my eye area is dry and the same applies for when it’s puffy. Other than that, I concluded that there was nothing to be done about the darkening under the eye other than cover it with make-up, nor could anything be done about the fine lines.  However, I am absolutely in love with this treatment as it has made such a difference to all of the issues I have with my under eyes.

In a few weeks, it’s softened the fine lines and lifted the blue colour that I always have under my eyes – regardless of whether I’m tired or not, although it does get worse when I’m tired – and made the whole area look much softer.  I seriously cannot rave about this product enough as it is officially the only thing that’s ever made any real difference to my under eye area, which is why I’m being so careful with not wasting it.  Now I’ll talk about a couple of negatives and I’ll start with the price:
This retails between £60-£70 depending on where you buy it, and this is for 15ml which is a huge amount to spend, I’m sure you’ll agree.  Normally I’d be unlikely to spend this sort of money on an eye treatment product, but I’m 100% repurchasing when I run out and as my birthday is approaching I might start hinting about this as a possible gift.  I’ve been using this religiously since the day it arrived which was 30/12/11 but I have no idea how much is left which leads me to my next point which is the packaging:

I really love the way this looks; it looks serious, clinical and hardcore! However, whilst it looks pretty jammy, it isn’t the most practical of packaging as the base is rounded which means that you’ll need to find somewhere to stands this or lean it against, as otherwise it’ll roll off the table.  Add to that the fact that there’s no real way of telling how much is left, means that you’ll need to guess how much remains and when to repurchase.  On a plus side though, the pump action dispenses the perfect amount for both eyes which is just the one drop.
This does moisturise really well, without leaving your eyes feeling greasy and sinks in quickly leaving you with plumped skin that doesn’t look ‘treated’.  It does sting a bit if you get it in your eyes, but nothing major.  I absolutely recommend this to anyone who has similar issues to me as whilst it isn’t cheap, I’m much happier spending money on something I know works rather than risking it on something that might not.  I’ve added this to my list of permanent skincare and I just hope my annoyingly stubborn skin doesn’t build up a tolerance to it!

More information on the ingredients can be found here and more info on the AR457 range can be found here.  Long Lasting Eye Contour can be purchased here for 76 Euros which, at the time of writing, converts to £63.21.